The health impact of climate change is felt most acutely among minorities and populations in poverty. Among those groups, Indigenous people have seen their environment impacted severely, oftentimes affecting general health and life expectancy. Loss of habitat, loss of health. Read more of the scientific studies below. 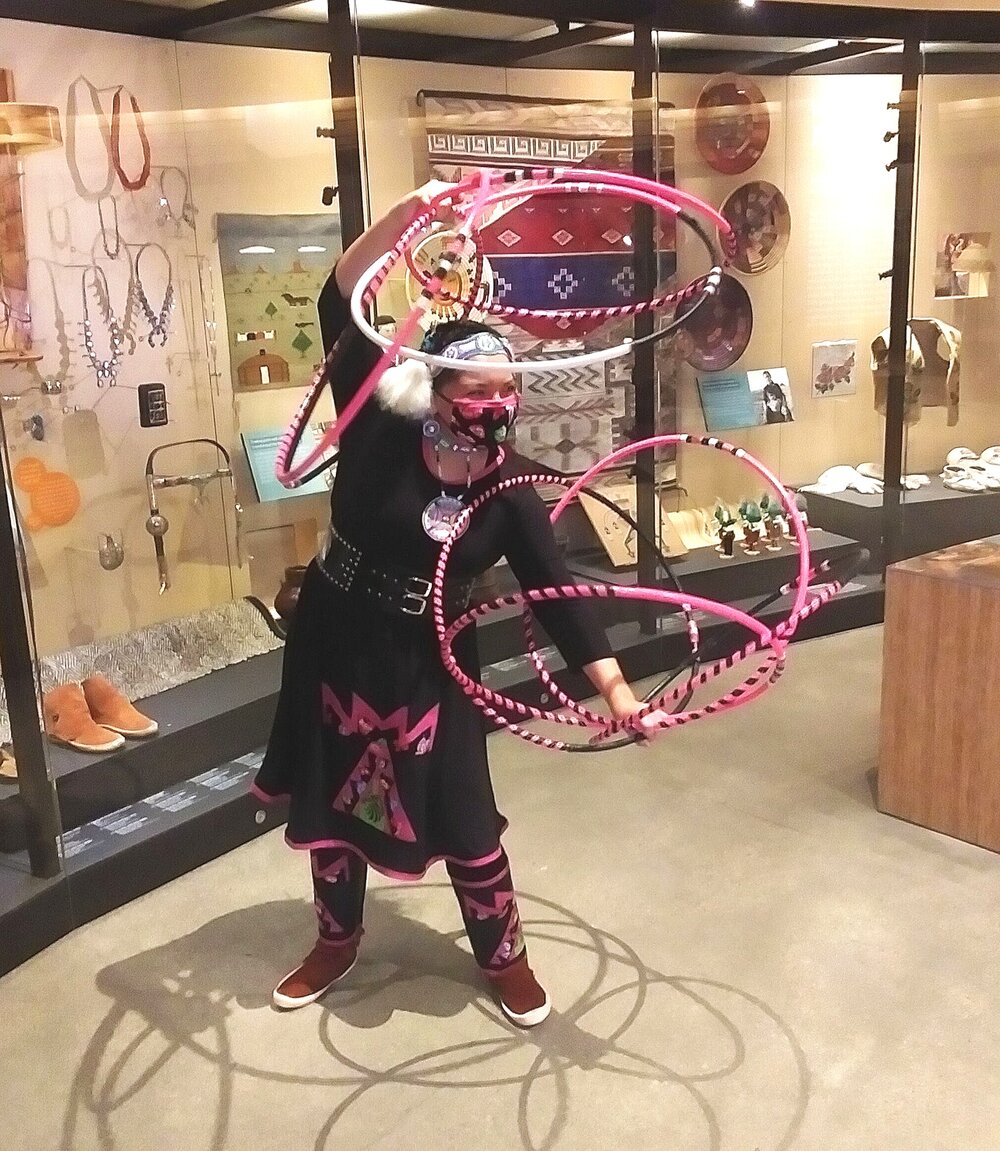 Where are the Birds? Sonoran Desert Suite

What does the struggling voice of Native Americans sound like as the impact of climate change continues to ravage their world? Where are the priorities, how is the loss processed, who speaks up about the issues?

Where are the Birds? Sonoran Desert Suite

Three weeks I’ve looked everywhere for the lost birds.  Even
in the park along the dry riverbed, just a few—two
mockingbirds belting out new syncopated love whistles, four vermillion
flycatchers diving like rubies on fire for insects in dead grass.
Sear the grass.  Sear the trees—pinched
prickly pears, dry rot barrel cactus,
thirsty saguaros pleated deep—rain,
they wait for rain, cry out to
one another through crumbling roots,
holding the last moisture in their cores.
We’ve been dry before.  Afterall, this
is desert, but where are the birds?  All winter
herds of finches, purple and house and the sweet wheeze
of goldfinches, white-crowned sparrows,
Albert’s towhees, Cardinals with blood-colored wings,
Gambel’s quail noodling to seed blocks, flocks
of mourning doves and the mad
laughter of gila woodpeckers drumming
into palo verde’s green arms, a cacaphony of song
competing at the feeders now full of untouched
millet and thistle seed swinging,
rocked by thin arid violins of wind.
From the arroyo, the rasping frog notes
of the one male phainopepla looking for a mate.

No grosbeaks, no Brewer’s blackbirds, no errant swallows

Not one migratory wing

At dusk the constant moan of owls measures the distance
between the Milky Way and the next frigid blizzard
a brillo of wind and subzero temps
scouring from Seattle to Atlanta to upstate New York.
Ours is the super storm of drought, brittle
daughter of Climate Change.

Last spring tens of thousands of swallows
and warblers dropped from New Mexico skies,
feathers perfectly preserved as if they’d been
laid out for taxidermists in high canyons
turned arctic with sleet and snow.
while D.C. politicians denied
responsibility for Covid 19 killing Indigenous,
Black and Chicanx communities, this huge die off of birds—
all relegated to the back pages of online news,
random Face Book posts, Gone Gone Gone
All Gone.

Driving the southern desert for hours on Route 86
across the Tohono O’odham Nation following the bulldozed gash
the steel Wall gouges, this week’s count:

35 ravens—five fighting mid-air above Indian Health Services in Sells
10 redtail hawks hunkered on electric poles
one cara cara topping a saguaro
one turkey vulture scouting road kill
near the Quijotoa cemetery
one Crissal thrasher dashing in front of my car.

Immigrant survivor of the 1918 Pandemic
and two world wars, my Grandma Anna
fed wrens in her yard, told me,
Honey Girl, no destruction
is ever final or complete.

A poem by Pamela Uschuk

Lockdown. No cars on the freeway. No buses. Motor roar, a bad memory. Is it my imagination or do even shy goldfinches belt out their tweets?

“Forests are more susceptible to disease and pests, such as bark beetles

From a 2020 CDC report on Climate Change:

“Americans are less likely to be concerned about climate change, with 59% seeing it as a serious threat.”

At the feeder, cardinals and pyrrhuloxia stun sky red, each feather smeared with its own wildfire.  Through clearing air we see the flounced steeples of Italian Cyprusses on a distant hill.  For the first time in decades, nuances of shade and light define mountain slopes.  We almost see endangered mountain sheep and the ghosts of jaguars walking split desert rocks.

Lockdown.  No cars on the freeway.  No buses.  Motor roar, a bad memory.  Is it my imagination or do even shy goldfinches belt out their tweets?

I remember Felipe taught us Tucson means black rocks in Yoemi, each rock a relative so ask permission to sit and rest.  From our Cresta Loma home above Pueblo Villas built by the mafia,

the city sprawls toward sunrise and south under its vanishing brown smog quilt.

Covid satelite spikes hook lungs they turn to concrete, burrow like tiny termites in hundreds of thousands of fevered hearts and brains.  We stay inside, stop eating out, stop visiting friends.  Lock down. No movies.  No comedy clubs.  No bar thump and squeal.  No swish of plastic shopping bags in sprawling malls.  The city stops.  We stay home.  We isolate.  Hunker down, hoard toilet paper, dry food.  No buses. No airplanes.  No rush hour exhausting air we breathe.  No inversions smother our sleep.  We breathe.  Wait. Nights we trace thousands of stars sprinkled like salt or sleet, trails for ancestors to follow from sunset to dawn.  Under seige, we breathe, masked-up, we breathe and cry at the rising tide of beloved relatives stacked in refrigerated morgue semis each night on TV.

Across the great crown of the Catalinas stretching the city from end to end, a death necklace of flame, fire tornadoes and hurricanes incinerating ancient saguaros, roasting lizards and snakes and coyotes in their rocky dens while we choke on smoke, on a pandemic’s rage, on our fear at this cataclysm after a year with no rain.  Cancer rates continue to climb.

I remember Colorado’s Mission Ridge Fire, bears walking up to exhausted fire fighters crying and holding up their burning paws.  85,000 acres with its million citizens gone.

I watched from the road a pack of coyotes run full out just ahead of the fire line north of Durango, screaming over their shoulders as the tops of pines detonated into flaming fountains a football field from their desperate race.

Over Vallecito Lake, ravens dropped to earth, their lungs burst by pyroclastic heat.

My dog and I hike the arroyo cutting through our neighborhood.  There is no destination but discovery.  At fourteen she paces me, sniffs to read local news.  No birds, but a forest of saguaros and at the heart of a saguaro family, the biggest barrel cactus I’ve ever seen, perfectly green, sheltered from pollution and disease.  On the upslope, her thorny head comes up to my shoulder.

We navigate the sand path of the dry stream, come upon artifacts—random electrical wire, a broken bench, rusted traffic signs from the time before aluminum, plastic pottery shards from Home Depot or Lowe’s, an empty cactus wren’s nest woven in teddy bear cholla arms, their thorns spiked like trebble hooks to anchor in flesh, built to protect eggs.  No wren in sight, but mourning doves moan from electric lines strung like cat’s cradle all over town.

We walk til we come to someone’s idea of fun—a homemade golf course. suburban country club smack in the arroyo’s course—flags tatter above raked sand greens, cups dug next Colorado River toads who’ll emerge from sand to sing and mate after the next flash flood.

Above us a commercial jet roars in, its chem trail raining invisible on our heads.

Nights coyotes scream after hares between golf flags.  Nine-stripe gophers dig their own holes in one.

Now, there are more mutant variants than the original virus…an invasion as overwhelming as white settlements on Indian lands.  The new President signs an order for more vaccine, signs an order to stop drilling in Bear’s Ears National Monument, the Arctic National Wilderness, where glaciers shrink and hungry polar bears cling to melting sea ice.

Will we leap from pandemic to pandemic, super-viruses teem, nature’s means of population control?

Twice as many Indians die of Covid than Whites.   In Tuba City, my Navajo friend writes the funerals never end.  His wife, a PA at Tuba City Hospital, works the intake tent.  She holds the hands of the dying, last week a respected elder couple who died next to one another on cots,

We want to be whole, hold a loved one’s hand as he or she leaves this world.  We want to believe in a way to alleviate suffering, to help the vulnerable thrive.  We want touch, a hug.  To see children play unmasked in the park.  To speak around a table in a class, laughing and learning the names of constellations and their luminous lives.  To hear a grandmother tell why there are clouds, how a girl tamed a gila monster or knitted her brother swan wings.

We want to kiss a friend’s face.  To kiss.

This is the story of the glamorous West.  The pioneer legacy.  White male privilege. No resources left unturned. No Indigenous culture left unburned.  Or free. The Western expansion of greed.  Rivers drained by gas and oil wells spidering under soil where crops grow, by mines opening shafts a mile down, by industrial agriculture spreading geneticaly modified seeds, by the unstoppable cancer of more square footage, the proliferation of our species until there is no place to be alone in the wild, our species spilling over with its insatiable hunger for things, things, things, our species its own disease, extinguishing millions of species of animals, plants, vast expanses of forests, deserts, prairies, oceans and building rich resorts on every square inch of beach until open land is rarer than platinum, until clean water and air are nothing but ancient dreams.

One afternoon, clouds build muscular wool promises, rumbling from the West.  The flash and churn, then rush of showers drumming the roof, filling the empty birdbath.  Next day, after rain, desert suddenly green!  Saguaro pleats stretched.  Caught in each tiny creosote leaf, on every mesquite thorn, one drop, filled with sunrise.  Across the wash, I see my dog through a forest of morning stars, her gold shepherd head haloed by new light.

February and Cedar waxwings fly through Tucson a month early on their way north.  I put out more water, even though they do not stop.  Thousands of birds have vanished.  Where did they go?  Traffic competes with the growl of commercial jets, incoming Air Force fighters, bombers, P38 transports scarring sky with engine thunder. Day and night, a bilious roar.

But where I planted a small forest of Peruvian butterfly bush, bottle brush, fairy duster, star jasmine, purple sage and bougainveilla, yellow-headed verdin hang upside down to feed. As I type, Anna’s hummingbirds dive at my head.  A painted lady butterfly and honey bees plumb orange trumpet flowers for nectar.  On a porch roof beam, a mourning dove couple reclaims the nest where last year a bull snake swallowed whole their baby.  In the bower of desert willow overhanging our gate, thumb-sized goldfinches sweet wheeze, No Hate, No Hate, No Hate.  May these small beauties survive our time.  Oh, disappearing wings, teach us responsibility, respect for the vulnerable and meek.  Before we lose every living being, I arm myself with shovel and seedlings to plant trees and trees and trees until all I can see around our house is green, green, indelible green.

“Pam’s poem, “Where are the birds?” gave me so much inspiration that involved grace and nature. A lot of the hoop dance, especially a women hoop dancer, is being graceful which is different from a men’s dance who are more aggressive dancers. When I thought of the poem, I instantly thought of all of the Eagle forms that I do. Eagles in our culture carry the strongest spiritual connection, not only with nature but our spirit, too.”